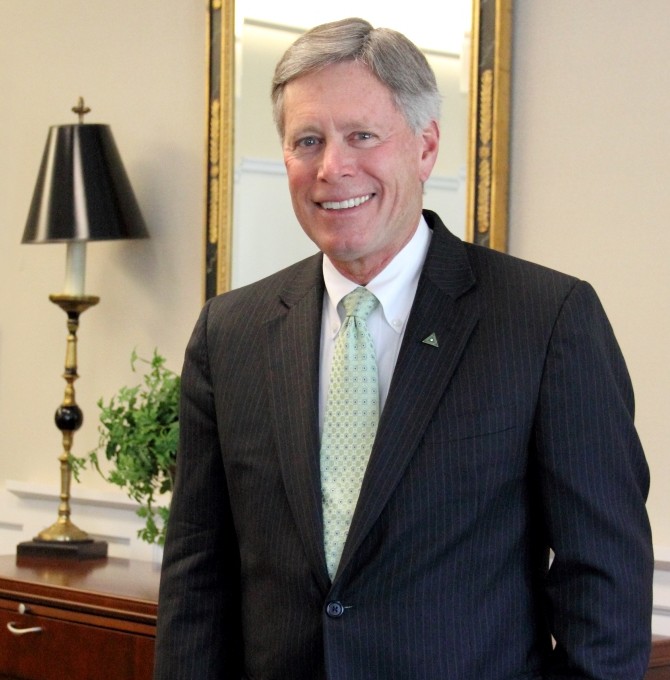 Delta State University and supporters from across the region will soon be gathering for a joyous inauguration ceremony honoring the university’s eighth president, William N. LaForge.

The Investiture Ceremony takes place on Friday, Nov. 1, 2013 at 10:30 a.m. in the Bologna Performing Arts Center on campus, which will be preceded by a week of scholarly and student activities and will conclude with the university’s homecoming game on Saturday.

Following Friday’s main ceremony, an inaugural luncheon will take place on the university quadrangle. For those unable to attend the official investiture, Delta State will be livestreaming the inauguration at www.ustream.tv/channel/13494725.

The inaugural theme is “Celebrating Excellence,” in tribute to the university’s historic distinction that will continue under LaForge’s leadership.

The Honorable Thad Cochran, United States Senator from Mississippi, will be the keynote speaker for the main event. LaForge was a chief of staff to Cochran during his time in Washington, D.C.

Fittingly, a National Alumni Association reception on Oct. 26 at 6 p.m. kicks off the week of celebratory events for LaForge, a member of the class of 1972 who is truly honored to come home.

Another highlight of the week is the recently established Delta State University Colloquia program, an ongoing series of top-flight lectures and addresses featuring prominent speakers.

On Oct. 27 at 7:00 p.m., the president, a lifelong musician, will take part in a fun-filled jam session along with students from the Delta Music Institute. He will be honored the following day at a student cookout on the university quadrangle sponsored by the Student Government Association.

The final pre-inauguration highlight is the Halloween evening Trunk or Treat and  community cookout sponsored by the Delta State department of athletics and the Cleveland-Bolivar County Chamber of Commerce. The entertainment kicks off Thursday at 6 p.m. at Statesmen Park and concludes with a fireworks show at 9 p.m.

For a complete list of scheduled events throughout the week, view LaForge’s official inauguration website at http://inauguration.deltastate.edu.

LaForge, who was selected in February after a six-month national search, took office on April 15. He has set the tone for a positive presidency with an energetic approach to boosting enrollment and effective operations amidst university budget restraints being felt statewide.

Before being appointed president at Delta State, LaForge was an attorney, registered lobbyist, principal of LaForge Government Relations, and worked for three different law or public policy firms. He specialized in federal government relations and represented businesses and other organizations with public policy interests before the United States Congress and federal executive branch agencies.

On Capitol Hill, he served as senior legislative counsel to Republican and Democratic lawmakers in both houses of Congress. He was chief counsel of the U.S. Senate Appropriations Subcommittee on Agriculture and culminated his government career as chief legislative counsel and chief of staff to Sen. Cochran.

Previously, he served as a congressional liaison for the Peace Corps and as a legislative assistant to Mississippi Congressman David Bowen.

To stay updated on President LaForge’s continuous Delta State efforts, visit his inauguration website at http://inauguration.deltastate.edu, his personal blog at http://president.deltastate.edu or follow him on Twitter @presidentDSU.