By October 4, 2013Academics, College of Arts and Sciences 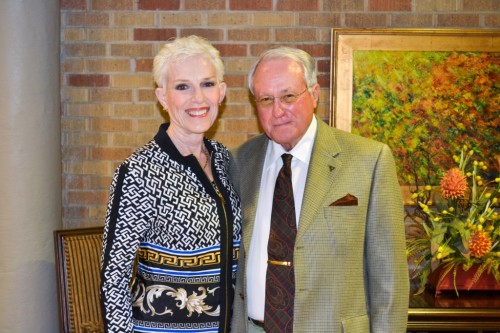 Delta State University will host the 21st annual Elliott-Nowell-White Science Symposium, beginning Wednesday, Oct. 9. The three-day event will feature world-renowned speakers in the fields of medicine, research and education and will conclude with the Recognition Luncheon keynoted by Louis Baioni on Oct. 11 at noon in the State Room of the H. L. Nowell Union.

The affair kicks off Wednesday at 3:30 p.m. with an armchair session by Dr. Robert Elliott in the Wyatt Conference Room.

The symposium was created by Drs. Robert and Mary Elliott, both Delta State graduates, to introduce Delta State students to doctors and scientists of international stature who can serve as role models.

The Elliotts founded the Elliott-Elliott-Head Breast Cancer Research and Treatment Center in Baton Rouge, La., and with the combination of vision and hard work, turned the center into one of the leading privately owned breast cancer research centers in the world. Robert is the founder, CEO and director of the center, which treats patients from across the United States.

He also collaborates on research projects with other scientists from around the world, and he has spoken to medical audiences in the United States and Europe. He is the author of “Breast Cancer-Anger at the Enemy,” which deals with the lack of total breast cancer care available for women.

Trained as a general surgeon, Elliott feels that breast care should be a specialty of itself, with patients being able to receive the highest quality of care from one physician who reads their mammograms, examines them, performs their surgery, and administers their therapies.

On Friday at 8:15 a.m., also in Jobe Hall Auditorium, Delta State student Justin Badon will discuss his student internship experience at the research center. His discussion will be followed by Dr. Christopher Jurgenson, speaking on “The Use of Protein Crystallography to Study Vitamin Biosynthesis and Cell Motility.” The final speaker, Dr. Brian D. Ghere, will present his talk on “Veterinary Medicine: It’s More Than You Think.”

The luncheon, complete with the awards presentation by Dr. Elliott, concludes the affair.

In addition, the Elliotts have established a program that provides fully funded scholarships for outstanding Delta State students. Recipients of these prestigious awards are honored with the title of “Elliott Scholar.”

Elliott was bestowed an honorary degree of Doctor of Science from Delta State during the 2009 spring commencement ceremony.

The Elliott-Nowell-White Science Symposium is free and open to the public. For more information, contact the Division of Biological and Physical Sciences at 662-846-4240.