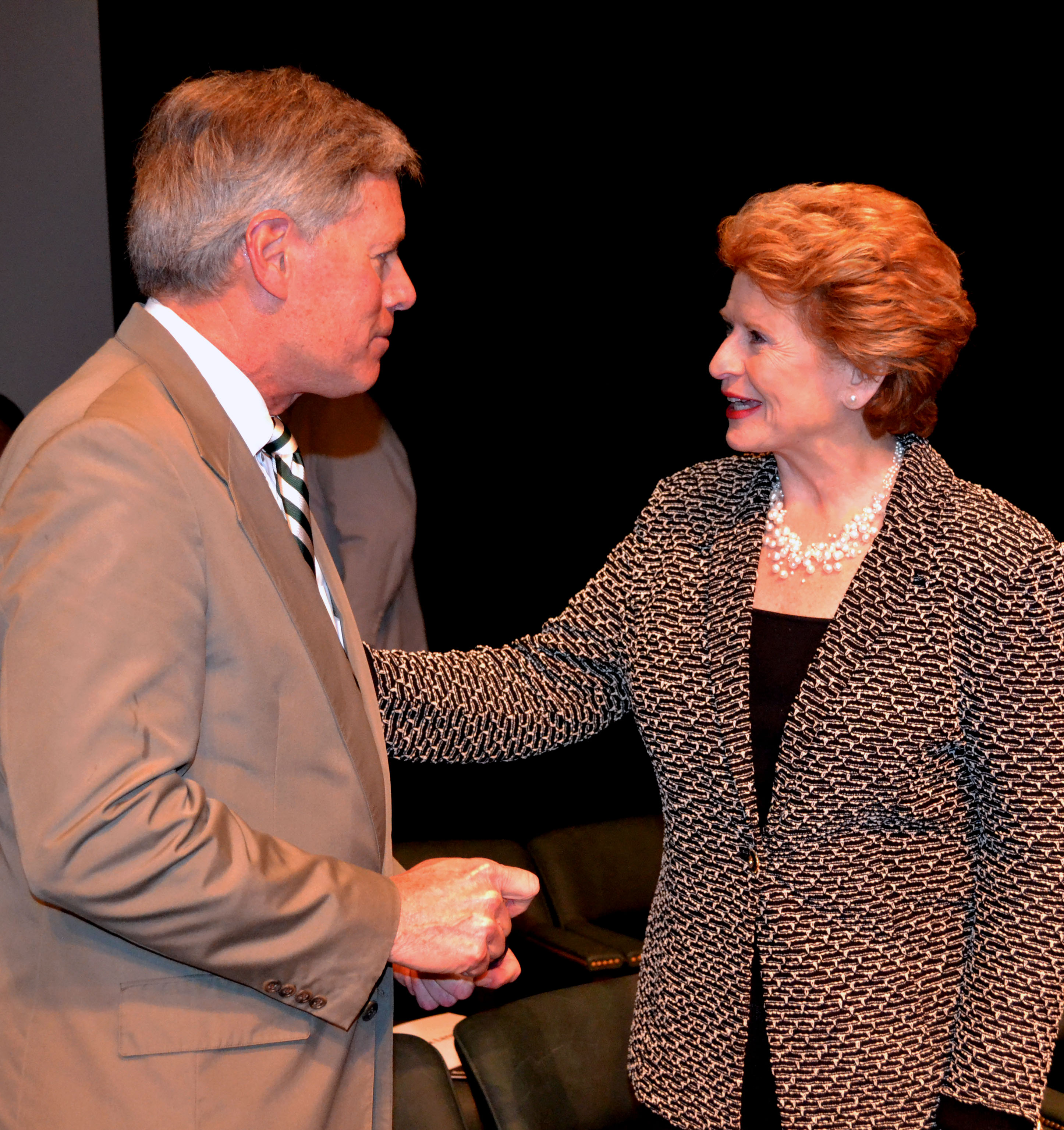 Politics, agriculture, and the economy were the hot topics on a rainy Delta morning as hundreds gathered for the 78th annual meeting of Delta Council, Friday, May 17, on the campus of Delta State University.
The event kicked off in the Bologna Performing Arts Center with a presentation by political analyst Stu Rothenberg titled “Lame Duck: What’s Ahead for President Obama and the Republicans” and a salute to Delta honor graduates by Delta State President William N. LaForge and former United States Secretary of Agriculture Mike Espy. Following the business session of the annual meeting, United States Senator Thad Cochran introduced United States Senator from Michigan and Chairwoman of the Senate Committee on Agriculture, Forestry and Nutrition Debbie Stabenow as the featured speaker.

Stabenow opened her remarks noting the history of Delta Council.  “I have to say how honored I am to be part of the distinguished history of the Delta Council. You have had so many notable speakers in your 78 years – from Dean Acheson to William Faulkner to George H.W. Bush and Bill Clinton… and several legislators, including your distinguished Senator, Thad Cochran. It is so great to have Senator Cochran as my Ranking Member on the Senate Agriculture Committee, and it’s been wonderful working with him as we try to get the 2013 Farm Bill over the finish line.”

The Senator then discussed the reaction when she took over as Chair of the Agriculture Committee.  “When I took over as Chair of the Agriculture Committee, a lot of people scratched their head. Because when they think of Michigan, they think of cars and pickup trucks.  We build the best cars and trucks in the world, hands down. We make things in Michigan, but we also grow things. Agriculture is part of my DNA – I grew up in a rural town in Michigan, and my mom used to tell me stories about growing up picking cotton on her family’s farm in Oklahoma.”

Throughout her address, Stabenow described the similarities between Michigan and Mississippi, “Even though the Mississippi Delta region has been called “The Most Southern Place on Earth” and Michigan is about as far north as you can go in the continental United States – we have to drive south from Detroit to get to Canada! – there are more similarities between Michigan and Mississippi than you may realize. Mississippi and Michigan both have rich musical histories. The Mississippi Delta is the birthplace of blues, and in Michigan, we have Motown. After World War II, many southerners moved to Detroit to work in the auto plants, including a talented young musician named John Lee Hooker. He was born in Coahoma County, but made a name for himself playing the Delta Blues at bars and clubs in Detroit’s East Side.”

Stabenow also noted the similarities between Delta State and her alma mater. “As a proud graduate of Michigan State University, I have to say that I couldn’t be happier with Delta State’s team colors – Green and White. And while no school in Michigan has a mascot to match your unofficial mascot, the “Fighting Okra,” I’m willing to bet that Michigan State’s Sparty would give you a run for your money!

“In Mississippi, 30% of all jobs are dependent on agriculture, the state’s largest sector,” Stabenow continued. “In Michigan, nearly 1 in 4 jobs are dependent on agriculture, which is our second-largest sector. And between our two states, you have almost all of the diversity of American agriculture. In Mississippi, you grow poultry and eggs, soybeans, forest products, corn, cotton and cattle, and in Michigan, we grow corn, soybeans wheat, fruits and vegetables, but we both play a critical role in supporting our country’s food supply and production materials.”

“So we’re in this together, and the Senate Agriculture Committee is a perfect example of that. Senator Cochran and I are working together for all of American agriculture, from California to Mississippi to Michigan,” said Stabenow. “We are all in this together because our farmers in America feed the world. With 7 billion mouths to feed and counting, our farmers have been leading the world in innovation and productivity.  And this has national security implications. Each farmer in America feeds at least 150 people, often people all across the globe. Thanks to the Food for Peace program, bags of commodities bearing the American flag are shipped all around the world to feed the hungry.”

In addition to national security implications, Stabenow believes agriculture has broad trade implications, too. “You’re growing the cotton here in Mississippi and I want us to use that cotton to make denim and clothes here. We have seen some of these jobs coming back, and I want to see even more of that success. We know that agriculture has been one of the few bright spots as our economy is getting back on track. In fact, it is one of the few areas where we actually have a trade surplus – where we are exporting more than we import. And those exports mean jobs and opportunities for growth in rural America. So as Senator Cochran and I worked together to put up the Farm Bill that we’ll debate in the Senate next week, we were mindful of the global nature of this bill,”  she said.

“We passed a Farm Bill last year with a broad, bipartisan vote – in the middle of an election year, no less,” said Stabenow.  “Unfortunately, the House did not take up the Farm Bill on the floor and the 2008 Farm Bill expired on September 30. This was unacceptable to us, as was the partial extension that was added to the fiscal cliff deal on January 1st of this year, which left out many key programs, including disaster assistance. So when Senator Cochran and I sat down at the beginning of this year, I told him I wanted to build on our successes from last year and give America’s farmers the Farm Bill they deserve. We had made great progress, and we knew that, together, we could make even more. Together, we worked to craft another strong Farm Bill that gives farmers the ability to manage their risk; that streamlines programs and cuts red tape for farmers; and that recognizes the diversity of agriculture from the cotton fields in the Mississippi Delta to the cherry orchards of Traverse City in northern Michigan.”

Stabenow thanked Senator Cochran for his leadership, noting that writing a Farm Bill that works for every region of the country can be challenging. “I’m glad Senator Cochran joined the leadership team and helped build the Southern connection we needed to make sure this bill works for everyone – that cotton, rice and peanut farmers receive the support they need to succeed.”

The Senator cited the changes in rice farming over the past 20 years as an example. “The high costs of rice farming have deterred entry for new farmers, the number of rice farms has dropped by almost half, and the average rice farm size has more than doubled between 1992 and 2007. We took this and other aspects of rice and peanut farming into consideration when creating a new price program. Under the Adverse Market Protection program, which would operate very similarly to the existing counter-cyclical program, payments are made on historic base acres and decoupled from production. This way, farmers would still have the freedom to decide what and where to plant,” she said. “For most crops, payments would only be made to farmers when prices drop below 55 percent of their historic rolling average. For rice and peanuts, however, there will be a fixed target price, and producers would have the opportunity to update their historic payment yields and acres. We also have included the crop insurance program designed specifically for cotton that we drafted in the 2012 Farm Bill that takes into account the unique challenges of cotton growers.”

Stabenow said the new Farm Bill will strengthen rural development. “This Farm Bill helps invest in the future of rural America by providing grants and loans to support distance learning, telemedicine – which has been a great resource for Michigan, and encouraging rural entrepreneurship so people can start new businesses and grow their local economies. This bill also continues our support for the most vulnerable families – people who have fallen on hard times through no fault of their own and need help putting food on the table for their children. We crack down on abuses in the system without attacking the basic structure of support that many families have needed to get themselves through this tough economy.”

Recognizing that the Farm Bill encompasses every facet of American agriculture, Stabenow said, “I’m happy to say that even in times of budget cuts, there’s enough room to make sure we as a country invest in all of these critical programs. And a wide majority of the Committee members agree. Three days ago, in the Senate Agriculture Committee room, we passed the 2013 Farm Bill, also known as the Agriculture Reform, Food and Jobs Act, with strong bipartisan support. The full Senate will be considering our Farm Bill next week, and I expect we will again pass it with strong bipartisan support. The House of Representatives also held its markup this week, going late into the night on Wednesday. The House is planning to bring its bill to the floor in June. The Farm Bill needs to become law, and I know I can count on Senator Cochran’s help in making that happen.But he and I will also need your help to make sure the House brings the bill to the floor and passes it, so we can work out the differences and send it to the President for his signature.”

Stabenow closed her remarks with a quote from President Harry S. Truman, “In the long view, no nation is healthier than its children, or more prosperous than its farmers.”