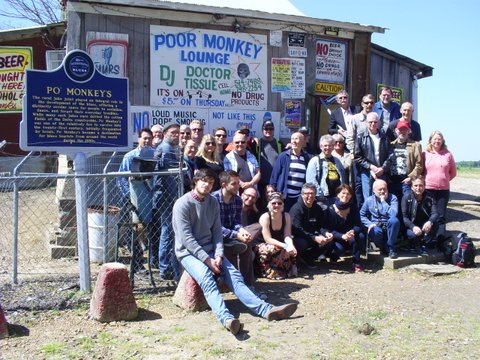 The Delta Center for Culture and Learning at Delta State University recently provided an introduction to the Delta’s heritage to a group of 30 Swedish Blues Enthusiasts.  Individuals came from all over Sweden and included some Swedish speaking Americans as well.  The tour began in Memphis and ended in New Orleans.  Stops in the Delta included the Delta Blues Museum, Ground Zero and Red’s Lounge in Clarksdale, Po’ Monkey’s Lounge in Merigold, The Delta Center at DSU, Dockery Farms, the Senator’s Place in Cleveland, the B.B. King Museum, and Robert Johnson’s burial site.  Many of the tour participants were Blues musicians, and all were very well-read, enthusiastic students of the Mississippi Delta.  This was the third Delta tour by the Swedish travel company Travel Arena Falun, based in Falun, Sweden, and they expect to return to the Delta regularly.