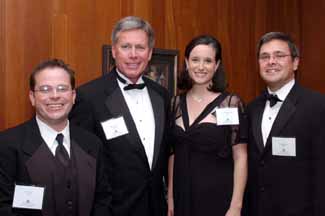 As part of the recent Homecoming festivities, Delta State University hosted a reunion honoring past inductees into the Student Hall of Fame. Over 55 Hall of Fame inductees attended the reunion social and banquet held at the Cleveland Country Club. As part of the ceremonies, one Hall of Fame member from each decade was chosen to speak, with Bill LaForge representing the 1970’s; George Bassi, the 1980’s; John Cox, the 1990’s and Sayward Ely Fortner representing the 2000’s.

The Delta State Hall of Fame was established in 1972 to give recognition to the most outstanding students in the greatest endeavors. These ventures reflect excellence in various areas of student life, such as academics; athletics; service leadership; Greek life and overall involvement at Delta State. It is the highest honor a student can receive at Delta State.

A shareholder at Winstead Sechrest & Minick P.C. specializing in government relations/public policy, LaForge was recently named president-elect of the Federal Bar Association. A 1972 graduate of Delta State, LaForge served as president of the Student Government Association and as charter president of Omicron Delta Kappa, national leadership honor society. He also wrote legislation to establish the DSU Student Hall of Fame and was one of the first four students to be inducted. He received a law degree from the University of Mississippi, an LLM in international law from Georgetown University and studied international law at Cambridge University.

Bassi is a 1987 graduate of Delta State, where he received a degree in accounting and computer information systems. While at Delta State, Bassi served in the Student Government Association as senator, treasurer, vice president, and president. In 1994, he received a Master of Science in Mass Communications from the University of Southern Mississippi. Currently, Bassi is the Director of the Lauren Rogers Museum of Art in Laurel.

Cox is a 1996 graduate of Delta State, earning a degree in English and a minor in political science. At DSU, Cox was vice president of the Student Government Association,  member of Omicron Delta Kappa, national leadership honor society; a member of Lambda Iota Tau, literature honor society; and an orientation leader. In 1999, Cox received a law degree from the University of Mississippi. He is currently an attorney with Cox & Moore in Cleveland. Cox also serves as Cleveland’s Municipal Court judge, and president of the Bolivar County Bar Association. In 2002, Cox was selected by the Mississippi Business Journal as the youngest member of the Top 40 under 40 in the state.

A 2004 graduate of Delta State, Fortner received a degree in English. While at DSU, she served as President of the Student Government Association, a member of Omicron Kappa Delta, national leadership honor society, and Lambda Iota Tao, literature honor society, and was an orientation leader. Fortner is currently working on a law degree at the University of Mississippi, where she is also a member of Phi Delta Pi legal fraternity.