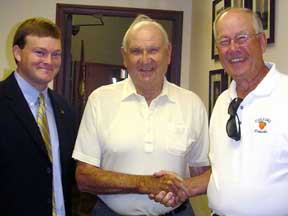 We all have our favorite teachers, educators whose impact was so great it carried far past our childhoods and stayed with us much through adulthood. For Delta State University alumnus, Dr. Richard A. Collins, that man was Frank Hough.

Collins was so touched, so impacted by the teachings and philosophies of Hough, he and his wife, Barbara Collins, have established a scholarship through the Delta State Foundation in honor of the former Shaw Superintendent of Schools.

Hough held the post of superintendent for 35 years (1923-1958) and according to Collins, “seemed to have no ambition beyond total dedication to educating the children of this small, Delta cotton town (Shaw) in a manner which I believe to be unique and highly successful.”

Collins continued of Hough’s values, “The first task of his system was to cover ‘the three Rs.’ Until this task was accomplished, nothing else was of significance.”

The disciplined framework he, himself, was reared in followed Collins far into his own educational career. A 1953 graduate of Delta State, Collins pursued his post graduate work at the University of Southern Mississippi before completing his doctorate degree at Southern Illinois University. He served as a professor of biology at the University of Central Arkansas before his retirement.

“As a professional educator for over 40 years, I have come to realize that Frank Hough was a school administrator with a wonderful vision for educating children in Shaw, Mississippi,” Collins concluded.  “I have yet to see a better educational system than the one he provided for these children.  I will always be indebted to him.”

He and his wife established the scholarship to be awarded to an incoming freshman based on financial need, as it was Hough’s vision and educational system that caused many small-town and rural children to see a better life and to become educated in a manner that helped them achieve that better life.

Of the offering, George Miller, Director of Development at Delta State, praised, “We are so thrilled that Richard and Barbara Collins have made the decision to establish this scholarship in memory of a Frank Hough.  Through this scholarship and the generosity of the Collins family, a student will be able to reach the goal of a college education.”

For more information on establishing a scholarship or to make a gift to Delta State University, please contact the Alumni/Foundation office at (662) 846-4708.