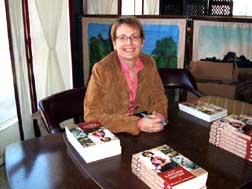 On May 25, Miriam C. Davis, Professor of History at Delta State University, spoke on her book, Dame Kathleen Kenyon: Digging Up the Holy Land, at the Kenyon Institute in Jerusalem. The Institute, formerly the British School of Archaeology in Jerusalem, was named in honor of Kathleen Kenyon, who excavated at biblical Jericho in the 1950s and Jerusalem in the 1960s. Written for a general audience, Davis’ biography of Kenyon is the first full account of her life and has received very favorable reviews. Among those attending the lecture where the British Consul-General Richard Makepeace, Dr. Kay Prag of the Manchester Museum (England), and several prominent Israeli archaeologists, including David Ussishkin of Tel Aviv University.
Press Releases