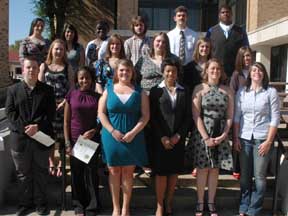 Phi Eta Sigma is a national honor society for college freshman who have a cumulative gradepoint average of at least 3.4 on a 4.0 scale on 14 or more hours of academic work during the first semester. In addition, the number is limited to five percent of the total freshmen enrolled.
Founded in 1923, Phi Eta Sigma is the oldest and largest honor society for first-year college and university students. The goal of the society is to encourage and reward academic excellence among first-year students in institutions of higher learning
Press Releases