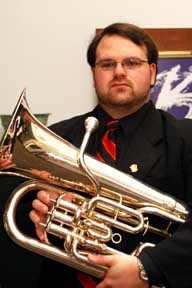 Mark Helmstetter, son of Johnnie and Pamela Helmstetter of Belle Chasse, Louisiana, will be presenting his senior recital on April 9, at 1:40 p.m. in the Recital Hall of the Bologna Performing Arts Center on the Delta State campus.

He is a student of Dr. Douglas Mark, assistant professor of music at Delta State.
Consisting of three pieces, Helmstetter’s performance will showcase the versatility of the euphonium by featuring a stylistically distinct program including “Symphonic Variants” by James Curnow, “Chant du Menéstrel” by Alexander Glazunov, and “Bolivar” by Eric Cook.
He has held a principal position in Delta State’s instrumental ensembles on trumpet, tuba or euphonium for over five years.  He is a member of numerous professional organizations as well as the noted American Society of Composers, Authors and Publishers.
In addition to his active association memberships, he currently serves as an associate publication editor for Tuba-Euphonium Press, director of bands at Pillow Academy in Greenwood, and is extensively involved with the national social music fraternity Phi Mu Alpha Sinfonia.
This recital is free and open to the public. For more information, contact the DSU Music Department at (662) 846-4615.
Press Releases