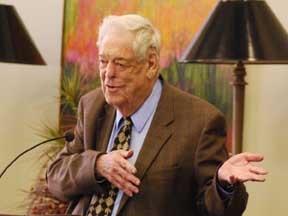 An expert on media issues, Dr. Merrill began his academic career at Delta State – and went on to international prominence as a journalism educator, philosopher, and author of 29 books. He is Professor Emeritus of Journalism at the University of Missouri, and has lectured extensively throughout the world.

An entertaining and thought-provoking lecturer, Dr. Merrill discussed his seven myths:  journalism as a profession, journalism providing democratic stimulus, the people’s “right to know,” free press in the U.S., the people’s  “right of access” to the media, journalism is unbiased and objective, and newspapers are newspapers.

Throughout the lecture, Merrill stressed the need for ethics in journalism.  “Journalism needs to be a true profession, an occupation requiring education, specific ethics and skills,” he said.  “We need a method to separate the valid from the invalid, perhaps a testing method similar to the bar exam for the law profession.”  He also added, “We can disbar a lawyer, we could de-press a journalist.”

Merrill questioned whether journalism provides democratic stimulus.  “What do we read that inspires us to become more active in government decisions?  We need actual instruction on getting our voices heard in the halls of government.” he said.

Merrill stated the myths were not negative, but thought provoking.  “These myths make us think about the type of press we’ll have in the future,” he said.

The Delta native maintains a keen interest in Delta State’s journalism program.   Through a generous donation, he established the Merrill Lecture Series, designed to bring working journalists to speak on the Delta State campus. Each year, the top DSU journalism graduate is recognized with the John Merrill Award, named in his honor.