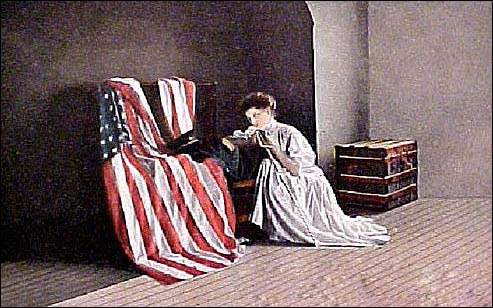 November 11, 2008 will mark the 90th anniversary of the armistice that ended the First World War. It would not be until 1919 that the Treaty of Versailles formally concluded the conflict on the eleventh hour of the eleventh day of the eleventh month was then and continues to this day be a solemn reminder that the ultimate tragedy of war is its futility.  A total of 344,724 Mississippians were required to register for the draft before the conflict ended, while some 154,000 were called up.  56,740 saw action by the time of the armistice, with 2,303 becoming casualties of war. Of these, 904 were dead. While these numbers pale compared to the losses suffered by Britain, France, Germany and Russia, they are placed in their proper context when it is realized that the population of the state at this time averaged 1,793,200, of which some 400,000 men were of age for military service. In other words, 38% of the state’s eligible male population found themselves called to service before the War ended, while 14% saw actual service. Of these, twenty-six were awarded the Distinguished Service Medal and three France’s Croix de Guerre. The Bologna Performing Arts Center, in partnership with Delta State University’s Art, History, Language and Literature, and Music Departments, and the Delta Music Institute, is hosting a series of events on the DSU campus to commemorate the end of the War. Delta State will join similar commemorations staged from Ottawa to Moscow, Sydney to Edinburgh in which the combatant nations of humanity’s first truly global war will both honor the dead of that conflict long past, and pray for peace in their own times. That the 90th anniversary rather than the centennial in 2018 will be particularly poignant reflects not merely the troubled state of the world today but also the simple reality that no veterans of the First World War will be with us a decade hence. Thus, 2008 presents DSU with a never to be repeated opportunity to join not only the American but the global community as it gathers to honor the service and sacrifice of these men and women while the last of their number remain alive. The commemorative events will include a performance of “Quatuor pour la fin du temps” Quartet for the End of Time by Olivier Messiaen, on Nov. 3 at 7:30 p.m. in the Recital Hall and a “Concert of Remembrance” involving instrumental and vocal music, the spoken word, and imagery on Nov. 11 at 7:30 p.m. in the Delta and Pine Land Theatre. Both events will be held at the Bologna Performing Arts Center on campus. The events by which Delta State University will commemorate the end of the First World War are not intended to be a history lesson in the whys and wherefores of the conflict. Rather, they are intended to remind a later generation of the Janus-nature of war, of its enthusiasms and futility, its glory and its horror. As an encounter with the generation that experienced the First World War, these commemorative events are intended to suggest that, however distant the conflict seems in the first decade of a new century, the hopes and fears of the world in 2008 are not so dissimilar to those it experienced in 1918.  In addition to the BPAC and academic department’s direct involvement, these events are sponsored by the Delta Center for Culture and Learning as part of DSU’s “Year of Partnerships.” All events are free and open to the public. For further information, contact Dr. Adam Lynde at the DSU History Department at (662) 846-4177 or e-mail alynde@deltastate.edu.
Press Releases