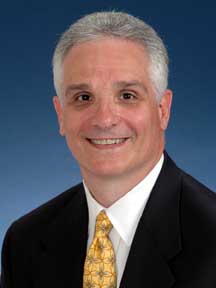 James T. Harvey, Executive Vice President of Global Distribution Services and Chief Information Officer of Hilton Hotels Corporation, will deliver the keynote address at Delta State University’s 81st Spring Commencement Services to be held on Saturday, May 10, at 10 a.m. inside Walter Sillers Coliseum on the campus.

Harvey was named to his current role in January 2007. He is responsible for overseeing distribution, technology, and shared brand services to the Hilton family of brands and their franchisees and owners around the world.
A 28-year veteran in the hospitality industry, Harvey has held various positions in information technology supporting various corporate, hotel and marketing business functions.  He was a business consultant and system development manager for Holiday Inns from 1980 to 1989.  Harvey was named Senior Director, Corporate Business Systems for the Promus Companies in 1990.  Harvey became Vice President and Chief Information Officer of Promus Hotel Corporation in 1995.  After the merger of Promus Hotel Corporation and Doubletree Hotels in 1998, he became Chief Information Officer and Executive Vice President and held that title until the acquisition by Hilton Hotels Corporation in 1999.
He is a member of the Management Information Systems and The Kemmons Wilson School of Hospitality and Resort Management Advisory Boards for the University of Memphis.
As a nationally and internationally recognized leader in technology, Harvey and his contributions to the industry were spotlighted by Bill Gates in his book, Business At The Speed Of Thought.
A Mississippi native, Harvey earned his BBA at Delta State in 1980. He was a member of the Statesman baseball team from 1977 to 1980, and received the Charles S. Kerg, Sr. Award, given to the top male varsity athlete at DSU for excellence in scholarship, athletic performance, and community and school involvement. He was also a member of the DSU Hall of Fame. Following his graduation from Delta State, Harvey went on to earn an MBA from the University of Memphis.
Harvey was named Delta State University’s Outstanding Alumnus of the Year in 2005. He also serves on the Delta State University Foundation Board of Directors.
Delta State is expected to graduate at least 475 students during its spring commencement.
The commencement ceremony is not open to the public, as seating is limited. Each graduate will be allotted six tickets.
Any audience overflow will be accommodated in the Jacobs Conference Center in Ewing Hall on campus, where family and friends will be able to view the ceremony by way of a live broadcast.
For more information on commencement services, contact University Relations at (662) 846-4675.
Press Releases