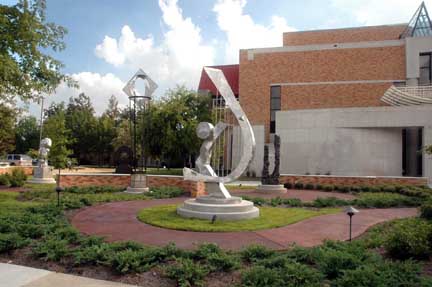 Delta State University is set to dedicate The Hazel and Jimmy Sanders Sculpture Garden outside the Bologna Performing Arts Center (BPAC) on campus, Sunday, Oct. 7 at 1 p.m.
The sculpture garden is the third phase of a project begun by Pam Matthews, a painter and wife of former Delta State President Dr. David Potter, in 2000.
“It was her dream that there might one day be a sculpture garden in front of the BPAC, and that idea surfaced in 2000,” explained Nan Sanders, who has been the facilitator of Mathews’ vision for the garden project for the Sanders’ family.
In 2000, the University held a national sculpture contest; seven pieces were entered in it and displayed in front of the BPAC for 18 months. At the end of the display period, a committee of five to seven independent artists voted on the winner, which was purchased by the University.
“Wind Harp,” created by North Carolina artist Wayne Trapp, received the purchase award for the first competition.
In 2002, a second competition was held. This time, eight pieces were submitted and displayed, with Glenn Zweigart’s piece “Haiku Man” winning the purchase award.
However, in 2004, the project was put on hold after Matthews passed away. Five sculptures from the second competition were donated to the University in her memory.
“The sculpture garden went by the wayside for awhile after that,” Sanders recalled. “Eventually, I approached my mother-in-law Hazel Sanders, who generously offered a donation in seeing that it got done.”
Although it took several years and several variations of design, the sculpture garden will now include room for pieces acquired in earlier competitions, future competitions, and a memorial to Matthews.
The sculptures across campus provide Delta State with a unique, artistic influence, while also providing valuable, hands-on education for students studying sculpture.
“I can take the sculpture students out and we can see and talk about those actual pieces instead of looking at a photograph or slide,” explained Ron Koehler, professor of art at Delta State. “I can break it down and see exactly how they are constructed and the materials they use.”
The placement of the sculptures across the University fulfills another of Matthews’ desires—to have an art-covered campus.
“We are very proud to have been a part in seeing Pam’s dream fulfilled. We think this is unique and will have a very positive long-range impact on Delta State and the region. I am not aware of another University in the state where public art is given such emphasis,” Sander concluded. “We are honored to play our part and encourage others to join our efforts. It’s for everyone, and a wonderful tribute to the spirit and vision of our beloved friend, Pam.”
The dedication ceremony will begin at 1 p.m., with current Delta State President, Dr. John M. Hilpert; former Delta State President, Dr. David Potter; BPAC Executive Director, David Dallas; and Sanders, all, offering brief comments.
Following the ceremony, the United States Air Force Band of Mid-America will be in concert at 2 p.m.
Sponsored by “The Bolivar Commercial,” the concert is free and open to the public.
Press Releases