Students Gear Up for College at Delta State 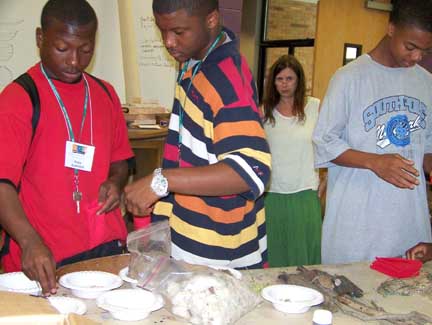 This summer students from all over Mississippi stayed on the campus of Delta State University during a weeklong residential camps entitled “The Mississippi Delta Arts & Heritage Summer Experience.”

The students, all who will be entering their senior year of high school in August, focused on college preparatory workshops, art and a heritage issue relating to the Mississippi Delta.  The first camp studied on the geography of the Delta, the second camp learned about the Blues, and the last camp looked at the Civil Rights Movement through the lens of the Delta.  The camps, which are in their fourth year at Delta State, were made possible by a generous grant from Gear Up Mississippi.  They were run by Delta State University’s Delta Center for Culture and Learning.

The college preparatory exercises included essay writing workshops, an ACT prep workshop, meetings with financial aid officers and admissions officers, and a career assessment with the Director of Career Services.  The students also had the opportunity to stay on campus and interact with current college students, better preparing them for their own college careers.

The art component was led by Pat Brown, a Delta State art professor with more than 15 years of teaching experience.  Students had several hours each day of the camp to work on art projects.  Art projects included basket making, the creation of African dance costumes using different textiles and dyes, journals, handmade paper, diddley bows (a type of one-string guitar) and mojos.

The Blues session gave the students many opportunities to learn about the Blues in its birthplace, the Delta.  They heard a performance by Bluesman Terry “Big T” Williams.  A dinner and harmonica workshop was held at Dockery Farms, an important site in the development of the Blues and home to, among others, Charley Patton, the father of the Delta Blues.  They toured the Delta Blues Museum in Clarksdale and the Highway 61 Blues Museum in Leland.  Don Mitchell and Dr. Shelley Collins, both professors at Delta State, talked to the students about how the Blues developed and how it influenced and was influenced by other genres of music.  Tricia Walker, a veteran of the music industry who has returned to Delta State to head the Delta Music Institute, gave a song writing workshop.  The students then had the opportunity to record their songs.