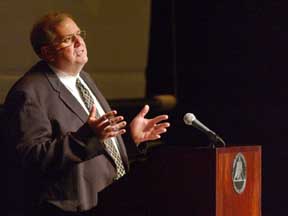 The address marked that start of Hilpert’s fourth year at the helm of the University, and the President wasted no time proclaiming the University’s state sound, offering, “Each year, I enjoy saying a particular sentence near the outset of this address. Here it is again in clear and unambiguous terms: the state of this university is sound.

“As we begin our 81st academic year, we can say unequivocally that Delta State University has more students and more resources than at any moment in its history. We are blessed with a strong faculty and a committed staff,” he continued. “Each year we discover some things about our organization, and what we learn makes us better.”

Of those lessons learned in 2005/2006, Hilpert noted, “Our relationship with Cleveland is one of the most precious treasures of this institution, and it has been a strength for our entire 80-year history.”

The University will conclude its year-long “Year of Cleveland” celebration with a culminating fireworks display at the Statesmen’s Sept. 23 football game.

Of the past year, Hilpert also reflected on the University’s compassionate spirit in the time of crisis, referencing the hurricanes that ravaged the Gulf Coast. “A humane spirit is alive and well in our community and on our campus and working together we can make a difference to people in crises,” he contended.

Delta State’s seventh president also highlighted some of the many departmental accomplishments from the previous year, including, in the College of Arts and Sciences, there were 68 scholarly publications or presentations by faculty; faculty earned one state award, one national award, three outstanding teaching awards, and the Kossman outstanding teacher award; in the College of Business, the Commercial Aviation flight team received its tenth consecutive invitation to the National Intercollegiate Flying Association Championship by placing in the top three programs in Region Four, the largest region of nine in the nation; the Small Business Development Center had a $3,500,000 economic impact on the Mississippi Delta; in the College of Education, accreditation was granted for the first time to the Athletic Training program; statewide governing board recognition came to the Educational Leadership program – awarded second place in the best practices competition; and in the School of Nursing, nursing students contributed 35,398 service learning hours over the past academic year which calculates to more than $630,000 in value added to local organizations and communities.

It was also revealed during the address that “The Year of Cleveland” theme will be replaced Health and Wellness in the Delta. “You will hear more about it and have opportunities to participate in the months to come,” Hilpert promised.

He concluded his 30-minute delivery to faculty and staff with, “We have completed and enjoyed a year filled with your achievements, and we are looking forward to everything you will accomplish in this new academic year.”

Classes at Delta State are set to begin Monday, Aug. 21 at 8 a.m. on the Cleveland campus.

For more information on any of the topics covered during the DSU State of the University address, please contact University Relations at (662) 846-4675.