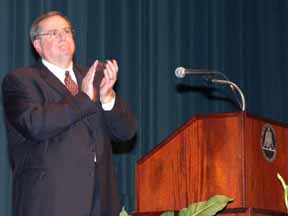 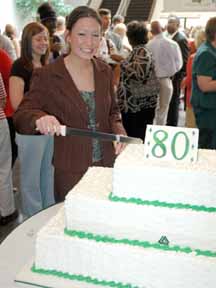 The address marked that start of Hilpert’s third year at the helm of the University, and the President wasted no time in welcoming all that were in attendance to the 80th academic year of Delta State University. He noted each of the previous 79 years in the history of the institution were predicated on one consistent “thematic thread” – excellence.

“There seems always to have been a determined effort to create and maintain excellence,” he contended.  “Therefore on this day, in recognition and honor of an unbroken institutional tradition, I issue a call. Let us resolve that those of us whose good fortune it is to serve Delta State in this 80th academic year will challenge one another to sustain excellence where it exists and to extend excellence to all corners of the University.”

That stalwart resolution would serve as the foundation for Delta State’s strategic vision for the 2005-2006 academic term. But before Hilpert explored that direction, he first, paused to acknowledge and applaud the many, many accomplishments of the past year.

“This past academic year was one of achievement,” Hilpert lauded. “The credit of these positive outcomes falls to you. Your efforts, your determination to succeed, your commitment to do the right things and to do them well, and your willingness to seek new ways to serve – those are the reasons that Delta State University is sound and that the tradition of excellence is alive and well.”

Of the accolades Hilpert highlighted were (but not limited to): 1. The Southern Association of Colleges and Schools announced the decision to reaffirm Delta State’s accreditation; 2. A national review of data by the Education Trust and American Association of State Colleges and Universities showed DSU at the top of its peer group of institutions for the percentage of entering students who graduate within six years of their first enrollment; 3. The headcount enrollment in fall of 2004 was the largest in history, and will likely increase by two percent this fall; and 4. The School of Nursing enrolled 30 new master’s degree students this fall in the program that has served on average six new students, a number which represents the largest growth in the history of the program.

From there, Hilpert began to “look ahead and recognize the course” that will steer Delta State University in this 80th academic year, a year that will be designated The Year of Cleveland in honor of the decades with a positive town and gown relationship.

“As a university, we will pay tribute to our host community with a series of events designed to focus on Cleveland’s leadership, its strengths and its support for this institution,” Hilpert reported. “During this year, we will ask and answer a question, ‘How can the University make significant and positive contributions to the development of 21st century Cleveland?’”

After detailing each of the eight strategic directives, Hilpert wrapped his 40 minute address with, “It comes down to three simple requests. Accept the challenge to excellence. Celebrate The Year of Cleveland. Work with me and your colleagues to reach institutional and departmental strategic goals.”

The assembly was followed with a reception in the lobby of the BPAC where 80th academic year birthday cake and punch was served to guests.

For more information on any of the topics covered during the DSU State of the University address, please contact University Relations at (662) 846-4675.