Doro Plantation Archaeological Artifacts and Reports · Back to Manuscripts 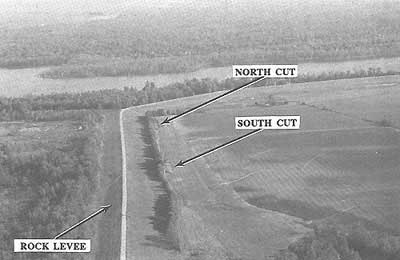 Site of the Beulah Levee project, where excavations were conducted.

Large-scale flooding along levee sections of the Mississippi River in the 1970’s led to the development of plans to construct a berm adjacent to the levee extending downriver from Beulah, Mississippi. Before construction of the berm could begin, an examination of its location for potential areas of cultural remains was necessary. Investigation of the area led to the discovery of the Doro Plantation remains. Three sites on the Doro Plantation were discovered along the cultural survey of the berm. It was initially believed that these sites were of significant archaeological importance. More research had to be done, however, to support this belief.
The three sites on the plantation that were examined included: Jacob’s Store, a store owned by Charles Clark’s son-in-law; Doro Big House, the home of Charles Clark; and Doro Gin, the site of one of the cotton gins on the plantation. Archaeological examinations of the sites involved: surface collections, test excavations, and subsurface shovel and auger testing. A total of 50,474 historical and 20 aboriginal artifacts were recovered during the excavations. After the survey was over, the three sites were found to be significant archaeologically and eligible for inclusion in the National Register of Historic Places.
Doro Plantation was initially settled by a Choctaw family in 1830. A series of lawsuits to the Mississippi Supreme Court, however, caused the family to lose their land to a settler represented by Charles Clark. As a part of his fee, Clark acquired some of the land owned by the settler. He used some of this land to form Doro Plantation during the late 1840’s and early 1850’s. The plantation was located halfway between Beulah, Mississippi and a large bend on the Mississippi River. The plantation grew to over 5,000 acres and became the most prosperous in the region, operating until 1913. It was prominent in the social, political and economic affairs of Bolivar County.

This collection, forty-three cubic feet in volume, consists mainly of artifacts and floral and faunal samples that were recovered from the Beulah Levee Project archeological survey conducted in the late 1980s. Historical documents and materials concerning Doro Plantation, which was located on the site, and the Clark family who lived there are also part of the collection. Also included is the field documentation of the survey, photographs of the survey sites, and historic and current maps of the area that were used during the survey. The artifacts, family papers and published findings establish the three series of this collection.

Series I (Artifacts)
Items in this series include: ceramic and glass fragments, bone fragments, coal, wood, stone, various items of iron and other metals, bits of brick and mortar, and some intact bricks from the Doro “Big House”. A smaller portion of the collection contains a number of prehistoric Indian artifacts, which are the remains of ancient settlements in the area. Items such as burned wood, bits of ceramic and stone, bone fragments, and samples of ash and soil make up this portion of the collection.

Series II (Clark Family Papers)
Also found in the collection is historical information on Doro Plantation and the Clark family. The Charles Clark and Clark Family papers, on microfilm, are part of the collection, as well as a thesis entitled The Operation of Doro Plantation (1852 – 1862) written by Bettie Vaughn Maxwell. There is also a work written by the daughter of Charles Clark, Annie E. Jacobs that is entitled The Master of Doro, an Epic of the Old South.

Perhaps the most concise and meaningful portion of this collection, however, are the three volumes that were published containing the finished results and findings of the investigation. Volumes I and II contain general background information, previous archeological explorations in the area, and an historical overview of the region prior to Doro Plantation’s existence, as well as a chronological history of the Doro plantation and it’s operation. Volume III contains information about the prehistoric Indian settlements that are believed to have been located on the site. This series also contains a daily journal recorded during the Beulah Levee investigation.
Note: A detailed box inventory is available in the reading room.