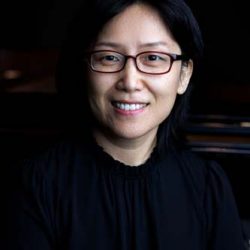 Dr. Jung-Won Shin has appeared as an active solo and collaborative pianist with a large range of repertoire for solo, vocal, and chamber music at recitals and concerts in the U.S., Canada, Ireland, and Korea.  She has won prizes and has been selected as a finalist at several solo, chamber music, and concerto competitions, such as the Bradshaw & Buono International Piano Competition, the Annual Kankakee International Piano Concerto Competition, and the Korean Festival Ensemble Chamber Music Competitions.

Dr. Shin has been featured in international and regional conferences of the College Music Society, the New Music on the Bayou Festival in Monroe, Louisiana, the Music in Action Conference in Los Angeles, the Lives of the Piano concert series at the Manhattan School of Music and the Beethoven Sonata Recital Series at the Yamaha Artist Services in New York, the Beethoven Bootcamp in Dublin, Ireland, the Summer Concert Series at Buam Art Hall and the Geumjeong Cultural Center in Korea, Rising Stars Concerts at the Orford Summer Music Academy and Festival, and guest recitals and master classes at several universities in the U. S. and Korea.  Her collaborative CDs, Chansons de la Nuit (Centaur Records) with soprano Amy Yeung and Franck and Fauré Sonatas with violinist Sue-Jean Park have been released.  Her current projects include a series of recitals on Beethoven’s piano sonatas and concertos, annual collaborative recitals with violinist Anne-Gaëlle Ravetto and trombonist Douglas Mark, recitals on works written by living American and Korean composers, and an anthology of Korean art songs in collaboration with soprano Teri Herron.

Dr. Shin has adjudicated several local, state, regional, and international solo, concerto, and chamber music competitions and has served as Chamber Music Chair, Vice President for Pre-College Performances, and Vice President for Pre-College Evaluations at the Mississippi Music Teachers Association (MMTA).  She has co-hosted the Art of the Piano, an annual piano festival at Delta State University (DSU) since 2010.  Recently she has initiated and organized academic and cultural exchange programs between DSU and Sungkyul University and Art & Culture Management CloudPoseidon’s musicians of traditional Korean instruments in both the U. S. and Korea. She has been on the guest faculty of the Summer Piano Camp and the Keyboard Festival of Sungkyul University.  As a clinician, she has presented master classes and workshops at several universities, high schools, and music festivals in Korea and the U. S.

Dr. Shin is currently Professor of Music and Coordinator of the Piano Preparatory Program at Delta State University, and the President of the MMTA.