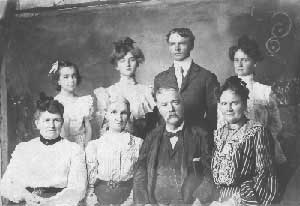 The Gibert family came to Bolivar County in the 1880s when Dr. Jere Gibert moved to Shaw from Copiah County. He was born in 1849 in South Carolina, but his family moved to southern Mississippi in 1859. He graduated from the Tulane University School of Medicine in 1870 and married Nancy Ellen Williams (1855 – 1926) in 1878.

Jere Gibert and Ellen Williams had three children, Col. John Maury Gibert (1879 – 1940), Vera (1882 – 1916), andSusie (b.1884). John Gibert was a graduate of West Point and served in the Philippines in the early 1900s. He married Virgie Tucker, and they had three children: Jere Tucker, Virgie, and Miriam. Vera was deaf and lived for some time at the State School for the Deaf in Jackson. Susie was educated in Holly Springs, at the Presbyterian Synod cal College (1900), and the University of Mississippi (1903 – 1904). She taught school at Seaton Place and
in Shaw. In 1905 she married Sam Dove Knowlton.

Sam Dove Knowlton (1880 – 1939) came to Bolivar County in 1889 at the age of nine when his father, Pole Knowlton, moved the family from eastern Arkansas to the Donelson Plantation, near Gunnison. The Knowltons had been in DeSha, Chicot, Phillips, and Monroe counties, in Arkansas since 1811, and Pole had been born in Napoleon in the 1850s. He married Emma Stafford of Warren County in 1877, and she died between 1880 and 1883. Sam Dove was their only child. In 1883, Pole Knowlton married Katherine Mary Darr, and they had a daughter, Polly. In 1895, he rented the Perthshire Plantation, which he purchased in 1906. The house on the plantation is known as “Bienaime.”

Sam Dove Knowlton attended the local schools, the Academy of Franklin (TN), and business school in Nashville. He assisted his father in running the Perthshire farming operation and store until he bought land adjacent to his father’s in 1905. In addition to farming, he served on the County Board of Supervisors for two terms, the local school board, the Mississippi River Commission, the Levee Board, and the Board of the Staple Cotton Cooperative Association. He also raised Tennessee walking horses.

Sam Dove Knowlton and Susie Gibert had three children: Maury Stafford, Emma Eleanor, and Susie Ellen. Maury was born in 1906 and graduated from the University of Virginia in 1928, attended a military prep school on the coast of Mississippi and married Martha Irving (b. 1910) from Tchula, MS and had three children: Martha (1936), Sam (1938) and Maury Stafford Jr. (1940).  Susie Ellie was born in 1917 and graduated from Southwestern College at Memphis in 1936.  She married Thomas Yates from Shelby, MS. Emma Eleanor graduated from Radcliffe in 1932 and also attended Sweet Briar. She married Jack Rose Humphreys of Greenwoood, a descendant of Mississippi Governor Benjamin G. Humphreys, and they had one child, Eleanor. Mr. Humphreys died in 1940 and in 1945 Emma married Stuart Lytle of Chicago, and they had two children, Robert (b. March 1946)  and Susan (b. Nov. 1947). After living in Illinois, Emma returned to Mississippi and lived until her death in 2000. She was an accomplished and well-known painter and sculptor. 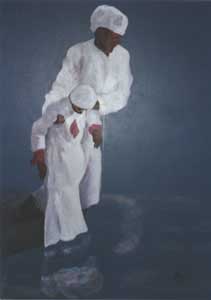 The Baptism by Emma Lytle

Series 1 consists of correspondence among the Gibert-Knowlton family and in lesser volume the Lytle family. This correspondence dates from 1871 – 1999.
Boxes 1 – 6

Series 2 consists of the WWII correspondence from Stuart Lytle to then Emma Knowlton Humphreys. Box 7

Series 6 has copies of textbooks, newsletters and various other printed materials. Boxes 17 – 19

Series 8 has various materials concerning Emma Knowlton Lytle’s art shows and art subjects. The bulk of the material is from the 1980s and 1990s. Boxes 28 – 31