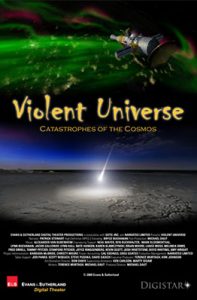 Join us for the 2020 re-opening of Wiley Planetarium. This event will include a double feature: the ‘Violent Universe’ planetarium show followed by ‘Astronomy Update’, a live discussion of the top astronomy discoveries for 2019. Arrive at 3:15pm if you would like to join us for a pre-show reception.