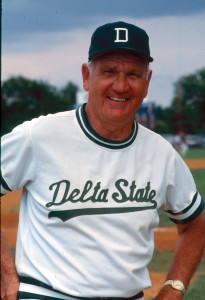 Most people simply know him as “Boo.” He is Dave “Boo” Ferriss, Boston Red Sox Hall of Famer and legendary coach of the Delta State University Statesmen. Ferriss retired following the completion of the 1988 season, but he continues to be a tireless supporter at all levels of baseball throughout the state and especially his beloved Statesmen.

The Shaw, Miss., native spent 46 years in baseball on the collegiate and professional levels, including 26 seasons at Delta State. A legend in national collegiate baseball coaching circles, Ferriss was inducted into the American Baseball Coaches Association Hall of Fame in 1988 in Atlanta, Ga. Ferriss compiled a 639-387-8 record, all at Delta State and his coaching record ranks him among all-time national coaching leaders at the NCAA Division II level. His 1988 team was ranked 9th nationally in the Collegiate Baseball poll. When Ferriss took over the baseball program in 1960 he started it from the ground level. The Statesmen played many of their games off campus and Ferriss coached without the benefit of an assistant. He directed DSU teams to the NCAA Division II Playoffs in eight of his last 12 years, including three trips to the NCAA Division II championships where the Statesmen finished third, second and third respectively in 1977, 1978 and 1982. Gulf South Conference championships came in 1978, 1979, 1985 and 1988, with the Statesmen finishing second in 1981 and third in 1982. Forty-nine of his players earned All-Gulf South Conference honors.

Ferriss also earned several honors for his coaching accomplishments. In 1988, he received the United States Baseball Federation Service Award for his contributions to the game. He has been named NCAA Regional “Coach of the Year” three times while also earning Gulf South Conference coaching honors three times. In 1978 and 1982 he was selected as “College Baseball Coach of the Year” in Mississippi and was runner-up in that category in 1985. His 1985 team was ranked No. 1 in the nation for several weeks in the NCAA Division II poll.

Under his direction, 20 Statesmen players earned All-American honors and 23 continued their baseball careers on the professional level. Twenty former players received Academic All-American honors and forty former players are now coaching in the high school and college ranks. In addition to his DSU coaching duties, Ferriss also served at various intervals as Athletic Director and Director of the DSU Foundation.

Ferriss, a graduate of Mississippi State, was signed by the Boston Red Sox after his junior year of college, and the lanky right-hander broke into professional baseball with Greensboro (N.C.) of the Piedmont League in 1942.

After military service he joined the Boston Red Sox in 1945 where he spent 10 years in the organization (five years as a pitcher and five years as the pitching coach). He was named “Rookie of the Year” with a 21-10 record, and he defeated each American League team the first time he faced them while winning his first two major league starts with shutouts.
In 1946, Ferriss was the American League’s number one pitcher with a 25-6 record and he pitched the Red Sox to a 4-0 win over the St. Louis Cardinals in the 1946 World Series. His major league record was 65-30. Ferriss holds several major league records that include the most consecutive home wins of 13 in 1946.

In the fall of 2003, the Mississippi Sports Hall of Fame announced that it would be sponsoring a “Mississippi Collegiate Baseball Player of the Year” and the trophy would be the name and likeness of Dave “Boo” Ferriss. Stephen Head, of the University of Mississippi, became the Ferriss Trophy’s first recipient.

In February of 2008, coach Ferriss welcomed back world-famous author John Grisham to Delta State’s campus for an athletic fundraiser. Grisham, a Mississippi native, began his career path “thanks to coach Ferriss” after the coaching legend cut Grisham from his team in the fall of 1978. In Grisham’s “The Kindest Cut,” the author details his time at Delta State and how coach Ferriss handled the difficult task of cutting the would-be outfielder.

Today, coach Ferriss continues to champion the cause of collegiate baseball across Mississippi and the U.S. He is a frequent speaker at civic clubs across the state, and he never misses an opportunity to watch “his” Statesmen play baseball. 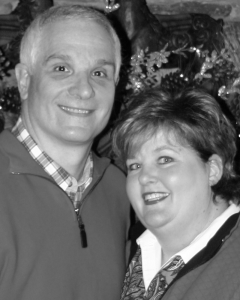 Tim and Nancy Harvey, 1980 graduates of Delta State University, made the lead gift of over $500,000 to the Ferriss Field Renovation Project. Tim Harvey, a four-year starter from 1977-80 in leftfield for coach Dave Boo Ferriss and the Statesmen, was a two-time Academic All-American and All-GSC outfielder. Harvey is now in private business after a very successful stint as a senior executive with leading global hotel companies including Hilton Hotels Corporation.

Harvey received the Lawrence L. Stewart Service Award in April, 2015 for his support of Delta State athletics. Harvey has also been recognized as the Outstanding Alumnus of the Year in 2005 and was elected to both the Student and Alumni Hall of Fames at DSU. He continues to serve his University, as an active member of the National Alumni Association and currently as Foundation Board President. As a student-athlete, Harvey helped the Statesmen to the 1977 & 1978 College World Series, and the 1978 and 1979 Gulf South Conference Championships.

Harvey still holds the career record for triples (14) and walks (140), and is tied for the  single-game hits record with six. In 1980, Harvey received the Charles S. Kerg award recognizing the top senior athlete. In 2008, Harvey was inducted into the DSU Athletic Hall of Fame.

Nancy Harvey, while at DSU, was a member and officer of Delta Delta Delta sorority and served on the Panhellenic Board. She was elected to and served as an officer of Kappa Delta Pi, an Education Honor Society and was chosen by the faculty as a Faculty Scholar and included in Who’s Who Among Students in American Universities and Colleges.

Nancy graduated with honors with a BSE in Elementary Education. Nancy taught third and fourth grades in Desoto County Mississippi. After retiring from full time teaching, her love for children and education led her to a part time position at Capleville Methodist Church teaching preschool and working with three year olds. Nancy is a long time member of The Josephine Circle, Inc., a non profit organization that provides scholarships and interest- free loans to students for higher education, where she served  on both The Board of Directors and Executive Board. She has financially supported several students with gifts and scholarships over the years in their pursuit of secondary and higher education.